Usage: for the manufacture of security barriers, which include barbed tape, barbed wire used as barriers to prevent the unauthorized entry of people and animals on sensitive sites. The essence: security barriers comprise at least one security element is formed as a helically coiled barbed tape with its supporting multiple nodes established intervals from each other. Barbed tape shielding member is wound on the frame formed by several line segments strung barbed tape, the ends of which are fixed to the rays of the multipath components. These elements are mounted for free rotation about the longitudinal axis of the security element in bearings mounted on support nodes. To make the overall stiffness security element during its considerable length, inside the frame placed multipath analogous elements in any number, the ends of beams which protrude beyond the edges of the barbed tape helically frame cover. The security element may be provided with positive drive rotation of its multipath components. The sharfs of multipath components may be provided with additional striking elements in the form attached to them in a random order or tapered symmetric branches of different lengths, or spikes, or barbed tape wrapped. The security element can comprise a plurality of frames and the envelopes of the barbed tape arranged coaxially relative to each other. Technical advantages: increased security properties; enhancing the overall stiffness of the security element; increasing destructive properties; increase the deterrent effect; improving the efficiency and reliability of the protection of sensitive sites.

The invention relates to building security installations and systems, which include barbed cutting elements, in particular – barbed wire Egoza, and can be used for the manufacture of security barriers used to prevent unauthorized entry of people and animals on sensitive sites.

The well-known fence to protect against thieves and other large animals, which contains a horizontal crossbar from a corner, attached to a vertical column and vertical fences welded to the bars indicated at regular intervals. Poles and fences made of metal rolling straight dihedral angles. The upper ends of the pillars and fences have the length each right dihedral angle to form a stud at this end [see Russian Federation patent №2296203 class E04N 17/14 published in 27.03.2007].

The main drawback of this sampling is insufficient security properties against thieves. This disadvantage is explained as follows. Since the fence has a flat structure and fences installed at regular intervals, you can easily take hold of the horizontal crossbar between fences and easy to climb over the fence without damaging of thorns. Thus, the famous fence is effective only as a barrier for large animals, but is not effective as a security barrier against thieves.

The main drawback of this security barrier is spherical security elements are not bonded to each other along the length of the security boundary. Therefore, any of them are quite easy to rip off the counter or delay by tilting it down, capturing, for example, a conventional hook to form a free passage through the security line as the rest of the spherical security elements prevent such failure or limb of one of them: after all, the spherical elements are not linked. And it is this fact (lack of unity and integrity of the structure over the entire length) dramatically reduces the effectiveness of the protection of sensitive sites using a known security barrier.

The closest in its essence and attainable effect, taken as a prototype, is a security barrier, which includes at least one security element in the form of a twisted spiral barbed tape with multiple supports his units, spaced at intervals from each other. Security elements in the form of spirals of barbed wire can be several, as well as a spiral may have different diameters, a base section and a vertical section, between which is placed a spiral of barbed tape. The turns of the spiral sections are attached to the unit support in two places, which allows you to create horizontal and vertical resistant barrier [see the International applications №WO 2007/078307 class V21F 25/00 published in 12.07.2006].

The main disadvantage of the following security fence is its low barrier properties. It’s fairly easily overcome, since its security element is fixed relative to the support nodes. This circumstance – the immobility of the security element – allows it to cover any sheet material, such as tarpaulins, thereby completely eliminate the effects of barbed prongs submunitions security barrier. Moreover, amazing elements, in this case, on the contrary, even an attacker will have some help, holding a sheet of material prong barbed tape from slipping, allowing it to smoothly overcome the barrier, climbing over the security barrier, and thus penetrate the regime object.

The basis of the invention is to increase the technical and operational characteristics of security barriers and enhance the security of sensitive sites due to the impossibility of placing it on any coatings to neutralize the harmful effect of sharp prongs barbed tape by the security element movable relative to its supporting components.

This object is achieved in that the security barriers comprising at least one security member formed in a twisted spiral barbed tape with multiple its supporting units mounted at intervals from each other, according to the proposal, barbed tape shielding member is wound around the frame formed by multiple strained rectilinear segments barbed tape, the ends of which are fixed to beams of multi shafts elements mounted freely rotatable about the longitudinal axis of the security element in bearings mounted on support nodes as well as to impart a total hardness security element during its considerable length, inside the frame has similar multipath components, in any amount, the ends of which beam within the dimensions of barbed tape, envelope spiral cage.

To increase the deterrent effect of aggressive or security member may have forced the rotational drive of its multipath components.
To enhance the damaging effects of multipath shafts of the elements may be provided with additional striking elements in the form attached to them in a random order or tapered symmetric branches of different lengths, or spikes, or barbed tape wrapped.

Of course, skeletons and envelopes of barbed tape may be several. In this case, the execution of the security barriers is arranged coaxially.

Due to the fact that the security element is movable, in particular turning in the horizontal plane, it is impossible to fix any coating or grab hold of the barbed tape or beams and tightened. In both cases, due to the application of load eccentricity relative to the axis of rotation, multipath components required to crank bearings and do not allow an attacker to climb over the security element.

Thus, the proposed security barrier achieves a technical result of the task. 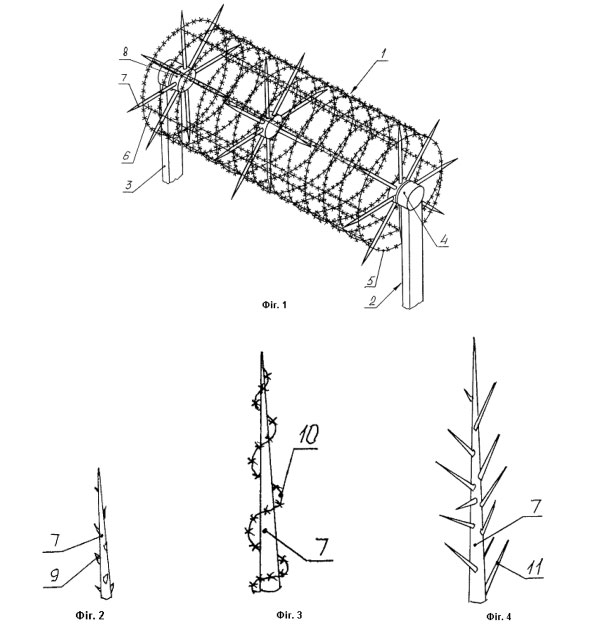 Further essence of the invention is illustrated for illustrative purposes, showing the following:

Each section of the proposed security barrier comprises a security element 1 is situated predominantly horizontally and mounted on its supporting units 2. The support units 2 are designed as mainly vertical uprights 3 with the radial bearing 4 at its upper end.

To make the overall stiffness security element 1 at its considerable length, inside the frame placed multipath similar elements 8, in any amount, the ends of which beams 7 protrude beyond the edges of the barbed tape 5, and the envelope of the spiral cage.

To enhance the damaging properties shafts 7 multipath elements 8 may be provided with additional striking elements in the form attached to them in a random order or tape 10 wound barbed, pointed or provided with branches 11 of various lengths.

In addition, the presence of additional rays 7 striking elements in the form of studs 9, barbed tape 10 or 11 branches sharpened generally excludes the possibility of their girth hands, which further increases the degree of barrier-security properties of the proposed security barrier.

The proposed technical solution tested in practice. The security barrier "Cobra" does not contain any elements and components that cannot be replicated at the present stage of development of science and technology, in particular, the production of safety barriers and security barriers is therefore acceptable for industrial applications, has the technical and other advantages over known such technical solutions for the proposed principle of fixing the security element to the support of its sites, which confirms the possibility of achieving a technical result of the claimed subject, in certain sources of information not found similar security barriers from those in the offer essential features, but because it is considered to be those that can get legal protection.

The main technical advantages of the proposed technical solutions, in comparison with the prototype are the following:

Social benefits from the implementation of the proposed technical solution are compared with the prototype obtained by the impossibility of penetrating sensitive sites.

The economic effect of the introduction of the proposed technical solution is compared with the prototype that is obtained due to ease of manufacturing fence and uses it for the common components and materials.

After the description of the proposed security barrier, specialists in the given area should be apparent that all of the above mentioned is merely illustrative, and not limited, having been presented by this example. Numerous possible modifications of the security element, in particular, the number, size barbed tape used drive and bearings, variants of tapes frames, number, length and thickness of the beams in the multipath components can vary in different ratios, and, of course, within the scope of conventional and natural approaches knowledge in the art and are considered to be within the scope of the technical solutions.

The quintessence of the proposed technical solution is that the security element is turning, and the rays of multipath components are equipped with additional striking elements, and that these factors, combined, allow to purchase the offer listed security fence and other benefits. Change and use of only the individual components of the security fence, naturally limits the range of the benefits listed above, and cannot be considered a new technical solution in the field of knowledge, since otherwise, similarly to the security fence, no longer require any creativity of designers and engineers, and therefore cannot be considered the result of their creative activity or a new object of intellectual property to be protected by the protection document.