The invention relates to the field of building security installations and systems, which include sharp barbed elements, and can be used for the manufacture of security barriers, which are used to prevent unauthorized access of people and animals on sensitive sites.

The given barrier to protect against thieves and large animals, which contains the horizontal bar of a metal bracket fixed to the vertical column and the vertical lath that are welded to said crossbar with a certain interval. Poles and made of rolled metal lath with straight dihedral angles. The upper ends of the pillars and each lath are lied right dihedral angle to form a stud at this end [see Russian Federation patent № 2296203 in class E04H 17/14 published in 27.03.2007].

The main drawback of this fence is its insufficient security properties against thieves. This disadvantage is explained as follows. Since the fence has a flat structure and lath is installed at certain intervals from one second, you can effortlessly take hold of the horizontal bar between the lath and easy to climb over the fence without damaging of thorns. Thus, the only effective barrier known as a barrier for large animals, but is not effective as a security barrier against thieves.

The closest in its essence effect is achieved, which is taken as a prototype, is a protective fence "Dikobraz" which is composed of a set of autonomous spherical protective elements, each of which includes many elements, made in the form of reinforced coiled barbed tape attached (wound) on basis formation in space frame. The space frame is made in the shape of a sphere, which is formed meridional turns of the wire and the equatorial ring mounted inside wire coils meridian. Meridian wire windings bonded to each other at the poles of the sphere and the equatorial ring. The protective barrier is set as follows. Ready first spherical protective element is attached to a vertical or inclined stand at the poles of the sphere and set in place protective abroad. Further, adjacent to the first spherical protective member disposing the second, third and so on. Similar spherical protective elements are installed on the entire length of the security barrier, forming a protective boundary [see Russian Federation patent № 2272113 in class E04H 17/04 published in 20.03.2006].

The main disadvantage of this significant protective barrier is low rigidity of its security features. Since the spherical base is made of a relatively thin wires, it is easy to deform (flatten) and thus form a free passage for the smooth overcome the protective barriers, which reduces the reliability of the protection of sensitive sites.

Another significant disadvantage of the known protective barriers is the high complexity of manufacturing it spherical elements and their mounting on enforcement abroad: because each of them must somehow attach, and this should be embedded in advance and lay the fasteners on the future of the turn. The process of installation is dangerous for installers: the high risk of injury in the course of manipulating a protective spherical element during its attachment to the fastener. Making the security element provides prefabrication spherical base with further wound on her barbed tape, which accounts for a lot of time stretching between the meridian wire frameworks. Action, first, time consuming and long time, and secondly, it is dangerous: in these difficult manipulations barbed tape by hand very high probability of employee injury. Thus, the structure of the given safety barrier is not technological.

The third major shortcoming is the inability of the protective fence construction of its operational, if necessary, for example, for closing the passage. The presence of this lack is explained as follows. The security element has a spherical shape, i.e. the shape of an unstable surface, especially if it is tilted. If such a shielding member set on the ground or pavement, it can move the wind even in the case if it is not fixed. In some cases, such as mass violation of public order, a sports fan or a militant youth, there is a need for operative blocking roads, sidewalks, holes in the fence, etc. The use of spherical protective elements known protective fence is virtually impossible, since it is necessary to spend a lot of time for fixing every one of them to the road surface, which (time) in case of force majeure is not there. This circumstance is due to structural imperfections protective elements narrows the scope of the known protective barrier.

Another significant disadvantage of the known protective fence is its low technical and strength characteristics. The presence of this shortcoming is due to the following. Protective barrier member made of a barbed tape wound on a wire substrate. Since the tape is made of sheet metal or wire of a small diameter, it can easily be cut, for example, conventional metal shears or snap conventional cutters, and so, affect the integrity of the security element. Thus, creating free passage in the protective fence for smooth penetration modal facility, this reduces the reliability of the protection of sensitive sites.

The basis of the utility model the task of reducing the complexity of manufacturing the protective barriers while increasing technical and operational characteristics of it. Expanding the scope of protection and reliability sensitive sites by changing the design of the security element by performing submunitions rigid and bases – as a convex continuous solid structure on which are symmetrically or randomly attached radially above solid elements.

The solution of the problem is achieved by the protective barrier is made up of a set of autonomous protective elements. Each of them includes multiple hitting elements fixed on the substrate. According to the proposal affecting member comprises a piercing and cutting hard tapered pins of different lengths, or randomly attached symmetrically and radially to the base preferably formed as a continuous convex massive structure, for example in the form of a cylinder or a spherical segment.

To increase the weight of the substrate, its inner emptiness can be filled by any hard material, for example, is filled with concrete. To enhance the effect of damaging, rigid tapered pins can be provided with additional striking elements in the form set out for them in a chaotic or a symmetrical manner sharpened branches of different lengths, or sharp prongs or barbed tape wrapped.

Due to the fact that the bottom of the base has a planar bearing area, no additional mounting when placed on the ground or on the road surface, thus it can be quickly installed at any desired location without fastening securely blocked passage. Thanks to sharp-barbed elements are arranged radially relative to the substrate, it becomes inaccessible to capture arms for the purpose of unauthorized removal of the protective element to open the passage. Prevents unauthorized removal of the protective element also contributes to the large mass of its foundations. Thanks to cutting-piercing submunitions in the form of sufficiently thick and rigid tapered pins cannot be deleted (a snack or a cut) by means of conventional techniques, for example, scissors, metal or conventional wire-cutters. Thus, the proposed protective barrier achieves a technical result of the task at hand, namely the improvement of technical and operational characteristics of the consumer or, in particular, protective properties, as well as the expansion of the field of use. 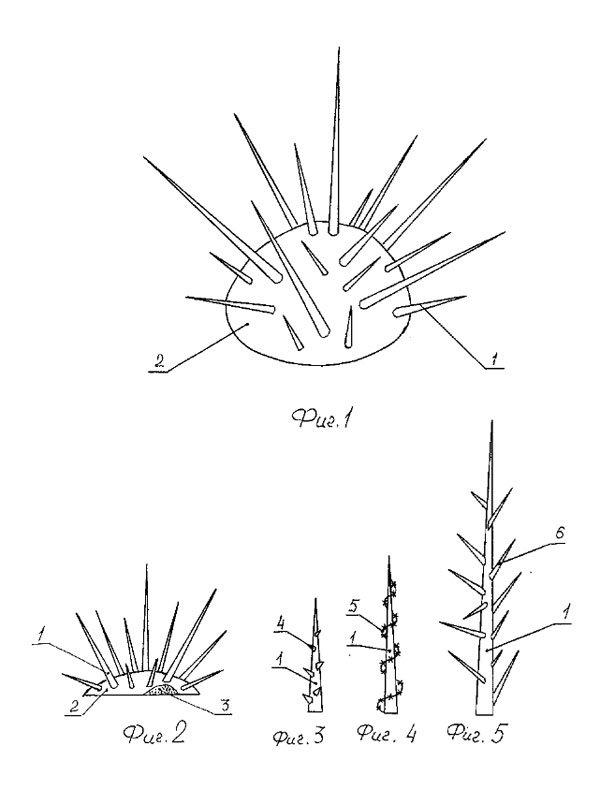 Further essence of the utility model is explained in conjunction with illustrative material, showing the following:

Elements of the sharp-barbed elements:

The proposed protective barrier composed of a set of autonomous protective elements. Each shield member includes many submunitions, which are designed as piercing and cutting hard tapered pin 1 of different lengths attached symmetrically or randomly, and preferably radially to the base 2 made in the form of convex solid massive structure, for example in the form of spherical or cylinder segment. Production of substrate 2 in the form of segments provides a flat support surface which adds resistance to the security element. To increase the weight of the substrate 2, its internal void can be filled with any heavy material, such as poured concrete 3. To enhance the damaging effect of rigid pointed pins 1 may be provided with additional striking elements in the form attached to them in a chaotic manner symmetrical or acute or pins 4 wrapped barbed tape 5 or 6 branches equipped tapered lengths.

The essential difference of the proposed technical solutions known from the above, is that the protective member comprises a massive base having tapered pins of different lengths which depart radially from it and equipped with the additional striking elements in the form of spikes, claws or branches barbed tape. These differences, combined exclude any possibility of overcoming the security element due to the impossibility for him to grasp, let alone that it is possible to climb through.

This circumstance allows us to consider the proposed protective barrier almost insurmountable. None of the prior art protective barriers cannot possess distinguished properties since their protective elements have a small mass or easily deformed due to the insufficient stiffness.

The proposed technical solution was tested in practice. The security barrier "Yezh" does not contain any components and assemblies that it would be impossible to recreate in the present stage of development of science and technology, in particular, the production of safety barriers and protective fences, and hence acceptable for industrial applications, has the technical and other advantages over known such technical solutions for the proposed structural changes to the security element, which confirms the possibility of achieving a technical result of the claimed object. In the known sources of information is not revealed these protective barriers with these essential features in the proposal and therefore relies so that can get legal protection.

The main technical advantages of the proposed technical solutions, in comparison with the prior art, include the following:

Social benefits from the implementation of the proposed technical solution, as compared with prior art, obtained by improving the protection of sensitive sites and the expansion of the use of protective barriers.

The economic effect of the introduction of the proposed technical solution, as compared with the prototype, obtained by simplifying the technology of manufacturing and installation of protective barriers, the use of common materials in the construction and, as a consequence – reducing its cost. After the description of the proposed protective barrier, specialists in the given area should be apparent that all of the above is merely illustrative, and do not limit, having been presented by this example. Numerous possible modifications of the security element, in particular, the number, size, options of the tapered pins on the basis of size, weight and shape of the latter may vary in different proportions, and, of course, within the scope of one of ordinary and natural approaches in the art knowledge and are considered within the scope of this technical solution.

The quintessence of the proposed technical solution is that the protective element is a massive base with rigid radial striking elements which can be fitted with striking elements, and these circumstances together, allow finding the proposed protective fence above and other advantages. Change and use only the individual components of the protective fence, naturally limits the range of the above advantages, and cannot rely on new technical solutions in the field of knowledge, as other similar describes a security fence already require no creativity of designers and engineers, and therefore They cannot rely on the results of their creative activity and new intellectual property to be protected enforcement documents in accordance with applicable law.