Line and method for the production of razor wire The invention relates to the production of razor wire, which are used for erecting security barriers designed to prevent unauthorized access to routine objects. The line for the production of the razor tape contains a stamp for forming the striking elements by punching holes in a continuous strip and a drum for winding the razor tape, the die having several punches of different shapes for successively breaking holes and slots between them in staggered order to simultaneously produce several razor tapes of a solid metal strip, and the number of drums corresponds to the number of spiny ribbons emerging from under the stamp. Drums are made in the form of bobbins, which have horizontal axis of rotation, independent means of tensioning the tape and a width equal to the width of the corresponding razor tape. The line is also equipped with a means for razor wire with metal wire by rolling it into the central portion of the barbed tape, behind which is located a screw distributor, behind which is a drum with a horizontal axis of rotation, on which a razor wire is wound with a screw distributor into one layer with laying of turns close to each other, and means for fastening adjacent turns with staples (clips), made in the form of ticks or clipper. Also, a method for manufacturing a razor tape, which is carried out on the claimed line, is claimed. The technical result of the claimed group of inventions is the ability to simultaneously produce several razor wires; ensuring the uniformity of laying the turns of the tape on the drum; increase in the number of products produced per one cycle of equipment operation; simplifying the design of the line; full automation of the manufacturing process of several razor wires. 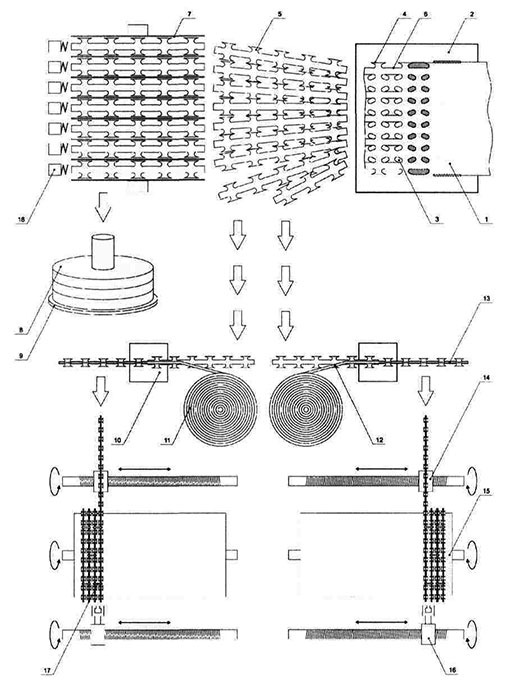